Fun fact: I’m a diagnosed clinically depressed human. Okay, maybe not so fun, but I’m very open about it, I can joke about what I call “my crazy,” and I’m not ashamed of it in any way. But I’m aware that there’s still a huge stigma about depression, and that the vast majority of people can’t seem to recognize it as an actual medical deficiency or condition as opposed to one huge, irrationally sad mood. My brain doesn’t work as well as others’ brains when it comes to making connections that have to do with, well, keeping basic sanity. And not overreacting to things. In my specific case, not dramatizing situations, which I’m preeeeeetty sure was the whole reason I’ve been known as a Drama Queen for my entire existence.

When I was first diagnosed in 2001 during my junior year of college, going on antidepressants was a quick fix. A clean, simple solution that I’m not sure actually worked, given the craziness of that time of life and the ever-changing relationship status I had with my boyfriend. After a few years, I decided that I wanted to “fight it on my own,” a phrase that makes me laugh in horror at my young, rebellious, stubborn mind. I mean, if I was diagnosed with asthma, or gonorrhea, would I have decided to “fight it on my own?” Absolutely not. Even things like acne and motion sickness are emotionally and physically damaging enough to warrant many different forms of medication and treatment without a second thought, or without suggestion that the sufferer is “too shallow about their looks,” or “would be better off just walking everywhere.” 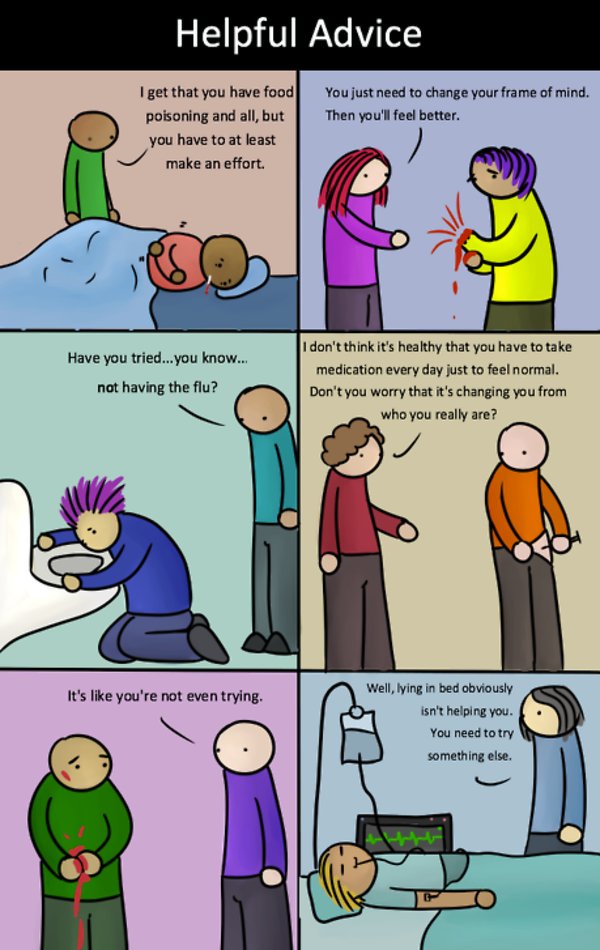 I started taking Zoloft again a year and a half ago under the medical advice of my psychologist and my general practitioner. It was a terrible start, complete with extreme nausea, insomnia and all kinds of fun things happening in my intestines. I considered quitting every day. Until almost two weeks in, when I realized that I could hear myself think. I remember the exact moment. I was in the car with my boyfriend (now husband; thanks, Zoloft!) and he asked me if I felt different. And the only answer was, “Yes.” And I asked him if I seemed different. And he just said, “Yes.” And then we both cried.

I was still sick to my stomach, couldn’t sleep for weeks and developed an awesome sinus infection to boot. But I was an adult woman with some side effects. Just three days earlier, I had been a confused, overreactive, sensitive woman with some side effects that made life seem unlivable at moments. I finally understood that I hadn’t felt human in years. I had been made up of feelings that came from what my brain was telling me to do and how to feel and think. And now, I was made up of actual emotions, and gut instincts that were louder and clearer than ever before. The impulses to take things the wrong way or to get irrationally angry still came up. But I just didn’t feel like acting on them anymore. It didn’t interest me. And eventually, they stopped coming up at all.

Now, I’m not trying to pretend that antidepressants are some sort of Magic Happy Pill, where everything is unicorns and tiaras, and cartoon characters run around singing and cleaning your house for you. There is definitely a lot more of that, for sure. But the main difference is that, instead of a jumble of physical reactions and chaotic thoughts entering my brain and body whenever I’m required to feel things, there is calm. Unless I’m mad. Then I feel mad. But now I know that I’m actually genuinely mad, as opposed to reacting in a mad way because my brain isn’t communicating well with itself.

Everyone has their own path to happiness. Some may involve therapy, some medication, some meditation, etc. There is no correct way. And while people fear that drugs of this ilk may leave them as a blank android of a person, I say: I have never felt more alive.

My name is Patti Murin. I love to sing, rescue dogs, live tweet “The Bachelor,” and hug my husband. I am also clinically depressed. And I’ve never been happier.

(Note: I am not a doctor. But I play one on TV. Though I play a pathologist, and that’s mainly dealing with dead bodies. So consult your real doctor if you’re considering any course of medical treatment for clinical depression. And know that there are different solutions for everyone. Love you all.)

25 thoughts on “Don’t Worry, Be Happy (or some crap advice like that)”