My idea of fashion is something that doesn’t make me look like I just rolled out of bed, which basically only excludes tank tops without a bra and boy shorts. Yoga pants? Cute with fun sneakers! Ponytails? Add a sparkly headband (www.sparklysoul.com) and you’re good to go! T-shirts? Bonus points if they are a subtle nod to your favorite TV show!

Last night, my friend Kat, my fiancée Colin and I sat on the couch and trolled every single social media site for live updates on the Met Gala 2015 arrivals. I know the general point of the Met Gala is to celebrate a new exhibit at the Metropolitan Museum of Art, and how awesome art is in general, and all that really important stuff, but everyone knows it’s just a huge celebrity fashion parade. This year’s theme is “China: Through the Looking Glass,” so we braced ourselves for a wide array of material interpretations. Since one of my favorite pastimes is judging things I know absolutely nothing about, here are my thoughts on some of the dresses/costumes/pageant wear that graced the red carpet last night. Note: Designers mean nothing to me so I’m just gonna pretend everyone went shopping in Lady Gaga’s closet.

Kate Hudson: Let’s start with an easy one. She is a golden goddess. A+ 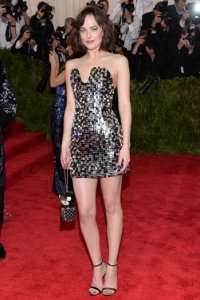 Diane Kruger and Josh Jackson: I have to admit, I was not a huge fan of the pant situation at first. But as the night went on and I kept coming back to this photo and impossibly gorgeous couple, I fell in love. A-

Kerry Washington: Let’s be clear, I think Kerry Washington is pretty flawless when it comes to red carpets and things. I even own a jacket from the “Scandal” collection for The Limited. I was so excited when I saw the gorgeous train on her gown from the back, and I thought Kerry was going to hit the jackpot once again. And then she turned around and I saw that someone ran out of fabric right when they got to the middle of the dress because they had accidentally used too much on the top. Throw in some emerald green shoes, and even Olivia Pope can’t fix this. C

Kendall Jenner: People say it’s boring, I say I love it. She looks stunning in that color and not too overdone, especially for someone of the Kardashian circus. A-

Sarah Jessica Parker: Points for really committing to the China theme! I don’t know, after everything she wore on “Sex and the City,” I can’t really find anything wrong with this one. A? B? C? Whatevs. 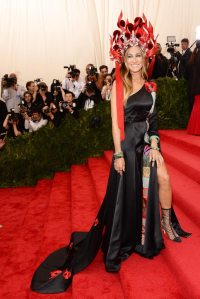 Anne Hathaway: You guys, I know this isn’t a popular opinion, but I am really digging on this one. It’s like she said, “Screw the China theme, I’m so excited about the new Star Wars movie that I’m just gonna dress like everyone in that.” And she obviously practiced her poses and half-smiles in the mirror, so I can totally respect that. B+

Amal Clooney (and that guy George): I have to put my ego aside for this one, because Mrs. Clooney DEFINITELY gave my fiancée “the eyes” when we went to see “Hamilton” last week, but she’s freaking hot. And smart. And that gown is amazing. And if anyone is gonna give my fiancée “the eyes,” I suppose I’m glad it was her. (That George guy looks fine too.) A

Solange Knowles: For literally half the night, I thought I was looking at the same picture of her over and over again, and that the wind had blown her dress up, but it had an awesome under layer that we were looking at. When I realized that was just her dress, logistical questions flooded my mind. How does she sit? Can she see? Is she forced to move her arms like a wooden puppet? Is this outer space? Does she like “Star Wars” too? What does the back of it look like? Is this literally a giant shield in case she decides to throw some punches again? It’s bold, but it hurts my eyes, so I’m forced to give it a D. (Though if this were the Natural History Museum gala, I would give it a B+.) 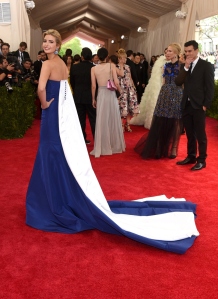 Ivanka Trump: Kat said it best: “Jessica McClintock circa 1994.” Will you go to prom with me? C-

Katie Holmes: I actually really like her dress. The sparkles and cut outs and color, and all the things that make it fun but still elegant. It’s her hair that gives me pause. It seems as though she went to Anna Wintour’s stylist and brought a picture of a Lego man for inspiration. There’s an unconfirmed rumor that it’s a wig, but either way, it doesn’t do it for me. Dress: B Hair: D- 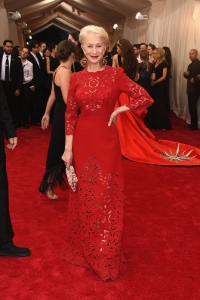 Helen Mirren: All hail the Queen. A 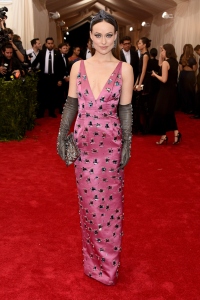 Olivia Wilde: Barbie meets She-Ra meets the discount cut glass section of Michael’s Craft Store. “Ooh, this one is 50% off! Let’s put it on EVERYTHING!” D- 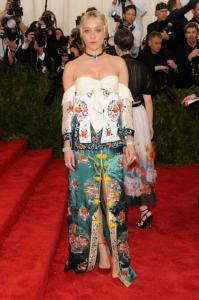 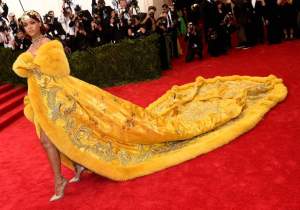 Rihanna: For me, she won the night. I know people have compared this gown to an omelet, or a pizza, but the color is stunning, and the train is out of this world, and it definitely fits the theme of the evening, and she looks like an awesome fluffy princess. Who cares if she can sit? Or walk? A+++++++

And finally, the big three of the night. I’m pretty sure there was a competition to see who could arrive LAST and MOST NAKED, because these ladies were LATE and NAKED. It’s like all of their invitations just said “Through the Looking Glass” and the “China” part was accidentally deleted. J-Lo? Love the color and the gown. She probably figures we know what most of her front skin looks like, so now it’s time to show off the whole side of her body. Kim Kardashian?  Something a little matronly about it for me. And Beyonce? She can do no wrong in my eyes, but this is not my favorite. I’m too concerned that her dress will shift and give the world a free shot of her lady bits to actually appreciate the craftsmanship. I hope she goes home and puts on sweats. J-Lo: A- Kim: C+ Beyonce: Unrateable. She isn’t actually human. 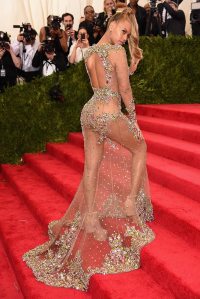