Call it what you want! Yes, the Miss America organization has had a long history of conflict, dealing with accusations of sexism, racism, and sizeism, and they’ve always seemed a liiiiiitle behind the pack when it comes to change and social reformation. But they try. They really, really try. From its humble beginnings in 1921, when the contest was held on the Atlantic City boardwalk, and the winner was crowned the “Golden Mermaid” and handed $100, to the multi-million dollar primetime network explosion of glitter and lipstick and jazz dancing that it is today, Miss America has firmly lodged itself into United States tradition. Whether you like it or not.

I, personally, like it. A lot. Like, tons. I watch it every single year, preferably with people who also like it, but alone (with Twitter) if necessary. I remember watching it when I was younger with my sister and her friends, and we would each choose one of the Top Ten contestants to be. We would even hold hands when it came time to announce the winner, just like the girls on TV did. And it has always stirred up a strange sort of state pride, because Miss New York? Always the one I’m rooting for (quick reminder, Miss New York has won the last THREE Miss America pageants, and one of them came from Syracuse, where I went to college, just saying and stuff). 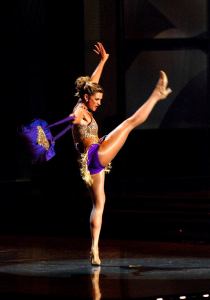 That bag is going to be a jacket soon!!!

One of my favorite Miss America moments? When Miss Nebraska did a theatrical dance routine to the song “So Much Better” from the woman power musical, “Legally Blonde,” and turned her prop BAG into a JACKET. She turned her bag into a jacket!!! It was Miss America at its finest, and ‘merica all the way.

So I’m going to use this space and your time to highlight some of the incredible women who have carried the title of Miss America over the years. Yes, the organization is constantly reinventing itself and figuring itself out, sometimes poorly, but the women? They will knock your socks off. 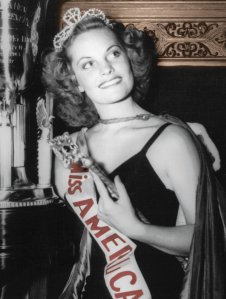 Jean Bartel, Miss America 1943. How gorgeous is she?

Jean was awesome for a lot of reasons. First of all, she downright refused to pose in a swimsuit after she won the pageant, leading the organization to lose their swimsuit sponsor. Jean? She didn’t give no craps. She had entered the pageant because she heard one of the judges was a big Broadway producer, and she wanted in. Also, Ms. Bartel was the one who came up with the idea that the winners should receive scholarships instead of fur coats and ugly jewelry as prizes. That suggestion was taken seriously, as it was integrated just one year later. For her talent, Jean sang Cole Porter’s “Night and Day” in a “forceful and dramatic style,” according her profile on missamerica.org. Next up on my To Do list? Learn how to sing “Night and Day” in a forceful and dramatic style. Thanks, Jean! 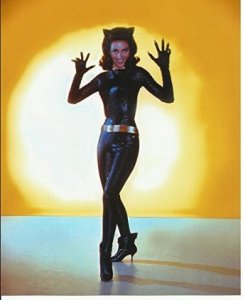 Ms. Meriwether is possibly one of the most famous Miss Americas, best known for her role on the TV show “Barnaby Jones.” I, however, know her incredibly well as Ruth Martin on the daytime television hit soap opera, “All My Children.” Thanks, mom! Ms. Meriwether appeared in many other TV shows and movies, though my favorite credit of hers is Catwoman in the 1966 “Batman” movie. The woman was Catwoman! One of the only female superheroes/supervillains to be depicted again and again and again! Something about that catsuit, man. Lee’s talent was a dramatic monologue from the hit Irish play, “Riders to the Sea.” Just kidding, I don’t know if it was a hit. Sounds pretty depressing, honestly. But yay, drama! 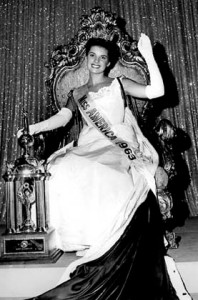 Jacquelyn Mayer, Miss America 1963:
Jackie Mayer was a mere 28 years old when she suffered an extremely debilitating stroke, leaving her unable to walk, speak, and survive on her own. She threw herself into rehab for seven years and now considers herself 90% recovered. She has since dedicated her life to helping others who have suffered the same fate, as well as assisting their families. She is a public speaker, and was also a spokeswoman for the American Heart Association. She has a nursing center and a highway named after her. Jackie’s talent was a medley of Broadway tunes (so fun!), including “Wishing Upon a Star,” “My Favorite Things” & “The White Cliffs of Dover.” Jackie, you’re the best. Thank you for using your fame as Miss America to help others in a very profound and selfless way. 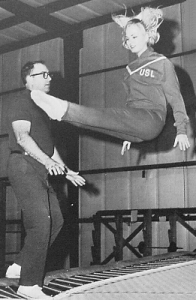 Judith Ford, Miss America 1969, in action on the trampoline

Now SHE is super fun. Judith was a world class trampolinist! She competed with the men’s team in college, and was the first woman to win a varsity men’s gymnastics letter. After the pageant, she went on to earn her Bachelor’s and Master’s degrees in physical education, and served on the President’s Council of Physical Fitness and Sports, appointed by US Presidents Richard Nixon and Gerald Ford. How cool is that? If she were 21 today, I bet she would have chosen American Ninja Warrior over Miss America. Judith’s talent was (duh) and acrobatic dance and trampoline act set to “The Blue Danube.” What I wouldn’t pay to see that. 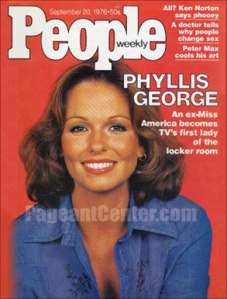 Phyllis was cool because she just loved sports. And by sports, I mean football. Phyllis began the battle that women have been fighting for years, and ended victorious as one of the first females (ever!) to have a nationally prominent role in sports coverage. She co-anchored the CBS show “The NFL Today” beginning in 1975, and gave hope to ladies everywhere that the former Boys Club of Athletics was penetrable. She also founded “By George” chicken fillets! I love chicken! If you think that’s cool, she also wrote three books about crafts and one on dieting. I don’t think I could write one book on crafts and dieting COMBINED. For her talent, Ms. George played a piano medley of “Promises, Promises” and “Raindrops Keep Fallin’ on My Head.” 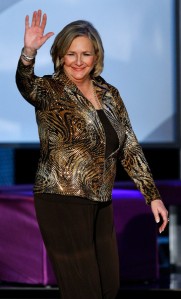 Rebecca Ann King, Miss America 1974:
Rebecca received a law degree from the University of Denver School of Law and became a practicing domestic-relations attorney specializing in divorce. She was the contestant who strongly advocated for the awarding of points for the interview section of the competition. So because of her, in 1975, it finally became a pageant that valued brains as well as beauty and talent. Since then, she has spoken in favor of female empowerment at many schools and organizations. For her talent, she sang “If I Ruled the World.” Kinda wish she did rule the world. Thanks, Becky!

Some of our more recent Miss Americas include Heather Whitestone (1995), our first deaf woman to hold the title. An inspiration to women with disabilities, she danced en pointe for her talent, unable to hear the music, but relying instead on her own rhythmic and musical skills to stay on the beat. Then in 1998, we had Kate Shindle (one of my faves!), who went on to star in multiple Broadway shows, and is now the president of Actor’s Equity Association, our freaking union. Like, I’m really good at complaining and declaring, “Things need to change!” But Kate is actually out there, actively changing things. In 2005, Deidre Downs took the crown, went to medical school after her reign was over, and is now Chief Resident in Obstetrics and Gynecology at the University of Alabama Medical Center. I can’t even get an AUDITION as a doctor, and this girl is one.

The point is, Miss America has given many of these women opportunities they may not have had otherwise, so they can have an impact on society, whether for charity, medicine, entertainment, or trampolining. For that, I will proudly cheer on these girls every single year. Because who knows? One of them may be delivering my baby someday, or running a charity that I volunteer with, or creating a diet where I can eat all the sugar and carbs I want. And we need as many of these women in the world as we can get. 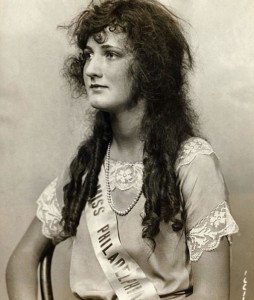 Ruth Malcomson, Miss America 1921. Dude, I could totally win if they let me do my hair like that.

Final thoughts from Ruth Malcomson, one of our earliest Miss Americas, who held the title in 1924. Ruth had ten rules for beauty that she followed, and I don’t know about you, but it seems like Ruth had the right idea, even way back then.

“I know pageants aren’t for everyone. I had people tell me it was a cattle show, and that I was being exploited. But the goal of the Miss America pageant is to promote women and give them opportunities and scholarships that they might not get otherwise. Since 1988, the contestants have had platforms, and I’ve heard contestants speak on issues that were near and dear to their hearts, such as homelessness, diabetes awareness and literacy. My ‘unofficial platform’ was women’s athletics. For me, the Miss America experience was extremely beneficial.”
-Judith Ford Nash, Miss America 1969

5 thoughts on “Here She Is, Miss America”