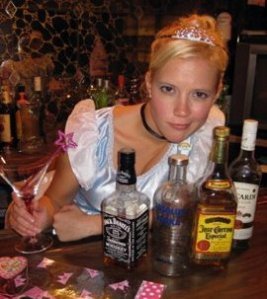 Once upon a time, there lived a beautiful girl named Ella. Her mother died when she was just a baby, and her beloved father remarried, as men are wont to do, even in Medieval-seeming times when women would most definitely get their heads cut off for even thinking about finding a new life partner after their first one had passed. Ella’s stepmother was a cruel, wicked lady who had raised two cruel, wicked daughters, much to the surprise of no one. When Ella’s father tragically died in some kind of forest/hunting/carriage accident, the poor girl was left alone with the three women on earth who hated her most. They immediately declared her the maid, forced her to sleep by the fireplace and took away her fancy clothes and jewels in exchange for rags and a head scarf. They also renamed her “Cinderella,” because she constantly had soot on her face. Which, when you think about it, isn’t exactly a terribly clever name. Like, would I be “Cinderpatti?” Or these days, would it be “Cinderkaitlyn?” “Cindervanessa?” “Cindergwendolyn?” Ugh, that would never into those bubble Scantron forms.

Anyway, we all know the rest of the story. Fairy godmother, royal ball, the Prince falls in love with Cinderella but she has to go or she’ll turn into a pumpkin, she loses her shoe, he finds her because no one in the whole wide world wears size 6 except Cinderella, they move into the castle and get married and live happily ever after, leaving those cruel witches behind. But then what……?

There are no true sequels to fairy tales. And I’m not talking about the straight to DVD ones that Disney does. I mean REAL sequels, where we find out what happened to the key players in the story. I’m here to reveal the truth. I bring you….

“Where Are They Now: Fairy Tale Edition”

A few weeks after Cinderella and Prince Charming celebrated their union with a glorious wedding (to which Cinderella graciously allowed her evil stepmother and stepsisters), Charming resumed his duties as Prince, which mainly consisted of hunting, not picking up the small animals he killed because he doesn’t like blood, pretending to swordfight, having a casual ale at the tavern with his pals from royal prep school, and studying to be King. Cinderella decided to reclaim her former name, Ella. She acquainted herself with the castle grounds, and found that there were many wooded areas for all of her furry friends to play. She built homes for them out of sticks and mud, and often came home as dirty as she was back in her housekeeper-of-her-own-house days.

You see, as Ella had never socialized with young ladies before, she did not know how to behave like one. She joined a book club that some of the ladies-in-waiting had formed, but found their first book choice, “The Help,” to be entirely unrealistic. She watched “Royal Kingdom Idol” religiously, but found herself scoffing at the talent they had found, knowing that she could sing circles of birds around every contestant’s head. Little by little, she found herself spending the majority of her time with the mice, rabbits, and birds who lived in the Royal Animal Kingdom (pretty unimaginative name, if you ask me) than with actual humans.

Yes, she still came in every evening to have dinner with Prince Charming, and to ask him about his day. But she was lonely. Her vocabulary wasn’t very large, since she had stopped talking to nice people at age 8, and so she had a lot of trouble making connections with the people of her kingdom. She spent most of her time with her furry friends, or alone.

One night, as Ella headed up to her bedroom chamber, she overheard two of her handmaidens gossiping and chattering. Curious, she hid behind the wall and listened to what they had to say:

“Oh, that girl is such a joke,” said the first one, the one with the big mole on her face. “She sure is beautiful and it’s pretty neat that she wears the only Size 6 shoe in the kingdom, but she’s essentially socially retarded.”

“I know!” exclaimed the second maid, the one who resembled a gnome, if gnomes were blonde. “Every time I try to speak to her, she mumbles and gets all flustered!”

“Well,” replied the mole-y maid confidentially, “maybe if she started spending more time with us humans, instead of talking to those disgusting mice all day. THEN she would be the Princess everyone in the land was hoping she would be.”

Dismayed, Ella turned away. She felt hurt. She felt sadness. But most of all, she was PISSED.

I mean, seriously?? First, her mom died when she was a baby. Then, her dad remarried the bitchiest woman in the kingdom, which means he was an IDIOT, and she was forced to make nice with her two stupid daughters. Then dad died, she had to be a maid in the house she once owned, and she had to sleep on a freaking cement floor. And now that all of her wishes had come true, people thought she was a freak?? Well OF COURSE she was a freak. She knew how to make tunics for mice, for Christ’s sake.

Ella went to bed that night, boiling over with this newfound emotion called “rage.” When she woke up the next morning, it was the beginning of a new era for the kingdom.

“Hey, Charming. Get your ass out of bed. No hunting today. Actually, no hunting, ever. I’m sick of you shooting your bows and arrows and crap into my buddies. Try going for a run by the lake instead. You’re getting a spare tire from all that ale.”

“To the people of the Royal Kingdom! I hereby declare that anyone with the name ‘Ella’ be named something else. I don’t care what, just not my name. It’s my freaking name, and I want it back. Thanks, bye!”

“Hey, handmaidens! Good news! You’re totally getting promoted. I’m going to let you work for the King now! You’ll get to wipe his old feeble chin when he dribbles pureéd carrots down it, and pick up his scepter every time he drops it, which averages like, every three seconds or so. And best of all, you get to bathe him! Good luck, sluts!”

Ella continued on this path of self-righteous rage until animals had more rights than humans, Charming developed an eating disorder, and she crowned herself Royal Kingdom Idol and held weekly concerts in the Town Square with mandatory attendance. The people became petrified of this formerly sweet, golden-hearted beauty, and life in the kingdom turned sour. The smiles faded, the singing ceased (except Ella’s, of course), and everything turned gray.

One day, Ella was on her daily shopping spree through the Royal Bazaar, when she heard something. She stopped in her tracks and gestured to her entourage to shush. It was a sound she had heard once before, but she couldn’t quite place it.

There it was again! Sort of like a high, tinkling bell that went up and down in range. Ella rushed through the bazaar to the farthest, most hidden corner, and couldn’t believe what she saw in front of her.

It was her former stepsisters, laughing. And like, laughing happily, not because they were being mean. They were dressed in rags with dirt on their faces, eating cold soup, sitting outside of the cardboard boxes they now lived in. But they exuded such joy, in spite of their seemingly tragic circumstances, that Ella began to weep.

And it struck her: “I am just like they were,” she thought. “I have turned into the evil stepsister of this kingdom. My power has driven me mad.” And the major epiphany: “I WAS HAPPIER WHEN I WAS IN RAGS.”

Ella immediately called for a town meeting. She humbly addressed her people from the balcony:

“I hereby apologize profusely for becoming a tyrant, a monster, a huge wench-y shrew. You deserve my love and my understanding. I hope we can start over again. I will still be Royal Kingdom Idol, but next year I will judge the competition instead of competing. Oh yes, and the Prince will be home soon from rehab, as he has gained at least 15 pounds back!”

From then on, she tried her best. That’s not to say she didn’t slip sometimes and fall into a power-hungry frame of mind, but hey, nobody’s perfect. Not even Princesses.

The moral of this story? If you look for something exterior to save you, the unrest will always come back. You have the power to make your own happiness.

One thought on “Where Are They Now: Cinderella”